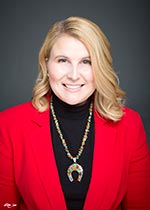 While in law school, Ms. Herrera participated in a number of organizations and was consistently on the Honor Roll/Dean’s List. Notably, Ms. Herrera was an editor on the New Mexico Law Review, and a Marshall-Brennan Fellow, which allowed her the opportunity to work with and teach high school students about seminal Supreme Court cases and coach them for a Mock Trial.

Prior to becoming a Law Clerk at Robles, Rael & Anaya, P.C., Ms. Herrera worked at the University of New Mexico School of Law, where she tracked eviction rates under the CARES Act at the height of the pandemic, and completed an internship at a workers’ compensation law firm. Ms. Herrera joined Robles, Rael & Anaya, P.C. in January 2021 as a Law Clerk, where she learned about and participated in the unique processes of litigation. After graduating law school and taking the bar exam, Ms. Herrera joined the firm as an Associate Attorney.

Ms. Herrera is proud to be a New Mexican and traces her roots back more than 150 years to Northern New Mexico. During her undergraduate career at the University of New Mexico, Ms. Herrera participated in various philanthropic events with her Women’s Fraternity, Chi Omega, and was a member of UNM’s Refugee Well-Being Program, which ignited her interested in attending law school. In her free time, Ms. Herrera likes to volunteer in the community as a member of the Junior League of Albuquerque, and spend time with her friends, family, and partner.